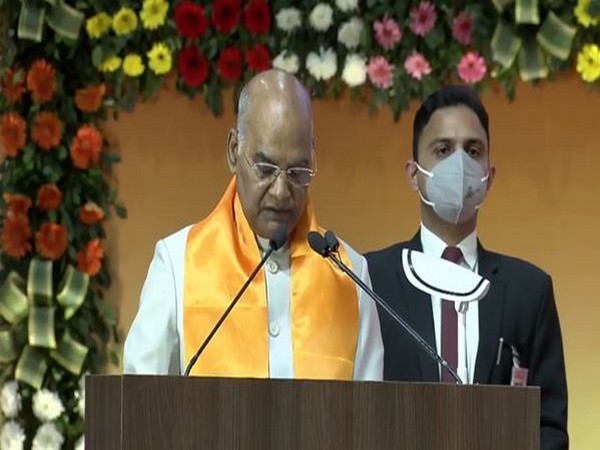 Gandhinagar (Gujarat) [India], February 24 (ANI): President Ram Nath Kovind on Tuesday said that educational institutions should try to make students capable citizens of the modern world.He made this remark while addressing the convocation of the Central University of Gujarat at Gandhinagar. The President said that under the new National Education Policy, efforts are being made to encourage modern education based on Indian values with the aim to make the country a knowledge superpower.Creating awareness among students about their duties in the changing world is also a major objective of the new education system. Our educational institutions should try to make students capable citizens of the modern world community. There is also a need to give special emphasis on the importance of public interest and morality by higher educational institutions, said the President. He stated that only by giving special emphasis on Indian values would we be able to differentiate between our educational institutions and foreign educational institutions based on western ideas. Addressing the students, the President said that building a strong and self-reliant India is at the heart of our global thinking.Local resources, experiences and knowledge should be used for self-reliance. Students can make their education useful in the true sense by empowering local development through research and innovation with utilization of local resources.He said that we should always remember that our education should benefit the development of our society and country apart from personal benefit.The President happily noted that about 55 per cent of the students getting an education in the Central University of Gujarat are girls and in todays convocation ceremony out of 21 medals 13 were won by girl students. He said that this is a great achievement of this university. It shows a glimpse of change in our society and a picture of a new India. The President noted that students from about 30 states are getting an education in the Central University of Gujarat. He also noted that 85 per cent of students are from other states and union territories. He said that in this way the University campus is like a mini-India and is strengthening our nation.
Educational institutions should try to make students capable citizens of the modern world: President Kovind. This article is published at 24 February 2021 02:26 from Sify India News and Top Stories, click on the read full article link below to see further details.